Japanese tattoos are one of the most popular styles in tattoo art, but were you aware that every image used in Japanese tattoos has a meaning and purpose? This is one of the reasons that the Japanese tattooing tradition has persisted for so long and has appealed to so many outside of Japanese culture. If you’re thinking about getting a Japanese tattoo, then we recommend reading this guide to get acquainted with the meaning of traditional Japanese tattoos and their meaning. There’s a lot to learn and if you’re going to put something on your body that lasts forever, you should at least understand its meaning. 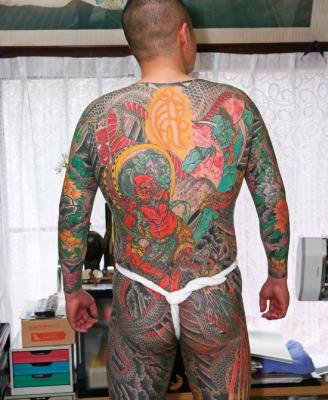 Traditionally, Japanese tattoos began as a means of conveying societal status as well as serving as spiritual symbols that were often used as a sort of charm for protection as well as symbolizing devotion, not unlike modern religious tattoos. Over time, tattoos in Japanese culture developed as a form of punishment similar to what was seen in Rome where it was common practice to tattoo prisoners of war, criminals, and slaves as a means of making their status in society instantly recognizable. Eventually the practice faded and tattoos returned as a status symbol among the merchant class who were, interestingly enough, banned from flaunting their wealth.

Following World War II, tattoos were outlawed by the Emperor of Japan in an effort to improve Japan’s image in the west. Tattoos in Japan then took on a criminal element, but this didn’t stop foreigners from being so intrigued as to seek out the skills of Japanese tattoo artists–a practice that helped keep Japanese style tattoos alive. The modern association between Japanese traditional tattoos and the criminal element is said to have led to the adoption of tattoos by the Yakuza, the Japanese mafia. This has also served to promote the “cool” aesthetic of Japanese traditional tattoos.

Today many people proudly wear Japanese style tattoos for their beautiful artistic merits, flowing composition, and the deep meaning associated with the many aspects of Japanese tattoo designs.

The Meaning of Traditional Japanese Tattoos 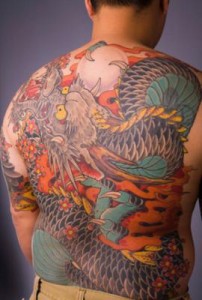 There are a number of images and symbols used in the Japanese style of tattooing to convey specific meanings. These images are used to convey a person’s beliefs, aspirations, or character traits. Called “motifs”, these design elements are intended to have the same meaning wherever they are used so that meaning is not unique to the individual. That means that anyone that sees the tattoo can instantly recognize the meaning and what they wearer wants to have conveyed, be it personality traits, character attributes, or association with a criminal organization.

Dragons in the West traditionally symbolize strength, ferocity, and wealth. They are a destructive force, but are also considered guardians. The Japanese, and the East in general, see dragons differently. In Japanese traditional tattoo art, dragons are generous, benevolent forces that use their strength to do good for mankind. Wisdom is another trait attributed to dragons. These positive connotations have made dragon tattoos among the most popular of Japanese style tattoos. 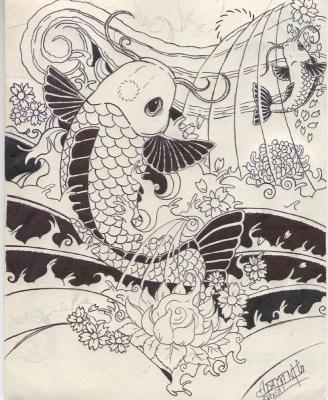 Japanese tattoos of koi fish are another of the most popular tattoo designs in traditional Japanese tattoo art. Koi are a specially bred type of carp, a fish native to China, where the Koi actually originates. Koi are given masculine qualities in traditional Eastern folklore such as strength and bravery. The Koi in China were known to attempt to swim upstream in the Yellow River, but very few could swim past a point known as “Dragon’s Gate”. Koi who did were said to be rewarded by turning into dragons. For this reason, Koi also symbolize determination and a strong desire to succeed and become “something more”. 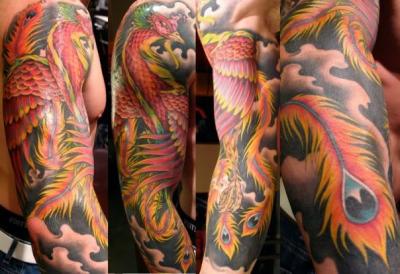 This tattoo, like many other Japanese tattoos, has a shared background with other cultures. Most of us are familiar with the story of the Phoenix, a bird that is consumed by fire and then rises from its own ashes. Many are not aware that the story exists in many cultures and at many times throughout history including Greek and Roman mythology, Middle Eastern folklore, and even the Americas. The Japanese phoenix story draws its source from the story that’s indigenous to mainland China. Regardless of origin, phoenix tattoos are meant to symbolize rebirth and triumph, as well a renewal and rebuilding of one’s self. 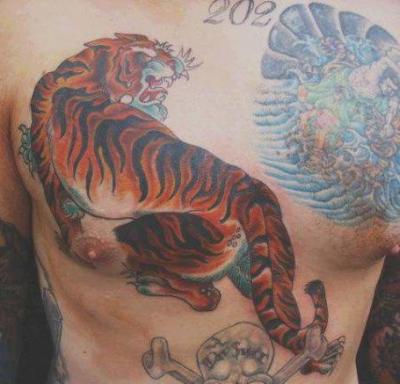 The Japanese tiger tattoo carries with it the same traits we attribute to the real animal–strength and courage, but also long life. The tiger tattoo is also used to ward off evil spirits and bad luck, as well as disease. The tiger is a symbol for both the North and for autumn, they are said to control the wind, and they are one of the four sacred animals. 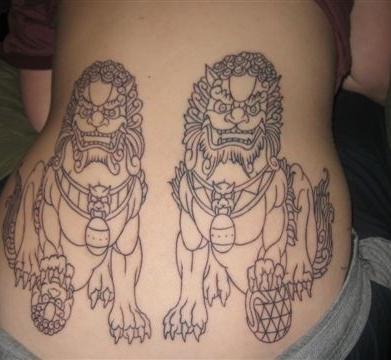 This tattoo resembles both a lion and a dog. More specifically, it looks like a lion with pointed ears. They are said to be protective, strong, and courageous. As statues they serve to keep evil out, as tattoos they serve as protectors and often indicate a courageous person with heroic aspirations. 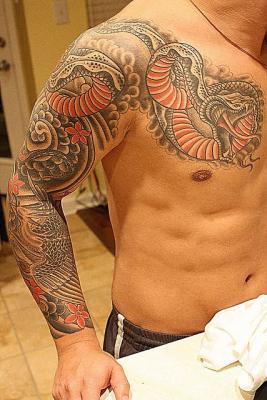 In traditional Japanese tattoos, the snake holds a wide range of meanings and performs a number of important functions. Among its many attributes are protection from illness, disaster, and bad fortune. Snake tattoos also represent wisdom and protection, particularly from the results of bad decisions. The snake can also embody regeneration, healing, and medicine as it was revered in Japanese culture in association with medicinal rites and remedies. As a symbol of good luck, it was also though to bring good health.

The Japanese snake tattoo also represents the Divine Feminine, or the holy female attributes. It was thought that much in the same way a snake sheds its skin, a woman could take on the positive attributes of a man. Seems a little sexist, but it was ancient Japan, after all. 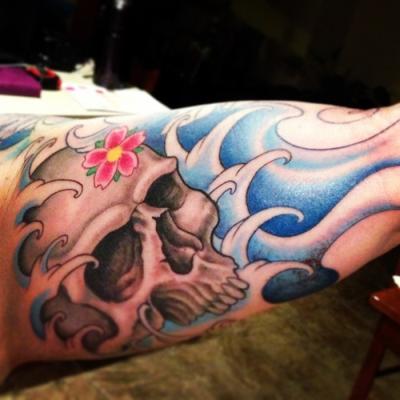 Though the image of the human skull in much of tattoo culture and art in general has come to have a negative connotation (such as death, danger, and an ill fate), the skull used in Japanese tattoos was intended to be a positive representation of the natural life cycle.

Traditionally, the Japanese skull tattoo represents change, which makes sense as death is the greatest change man can experience. 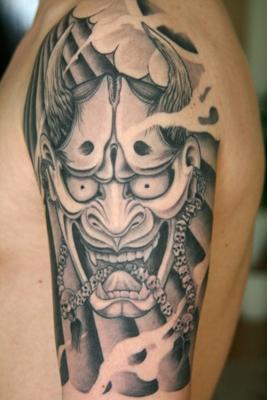 The Oni Mask tattoo in Japanese tattoos is extremely common and refers to the belief in a spirit world in which demons carry out their roles of punishing the unjust and evil, as well as spreading disease (seems like a random thing to be responsible for, but I guess it fits in with the whole evil-doing business).

While Oni are known for being evil, some Oni are good and are seen as protectors. One instance of this would include a monk who becomes an Oni after death to protect his temple. In English, the word Oni is best translated as ogre or troll (the Japanese word for “demon” is actually “yokai”). Oni, in traditional Japanese folklore, we marauding ogres known for terrorizing villages and tormenting villagers. Their association with demons in Japanese tattoo art has more to do with ogres being grouped into the realm of supernatural creatures (along with yokai) than anything else. Still, the symbolism holds as the imagery of the marauding ogre isn’t far from the idea of the evil spirit which the tattoo aims to convey. 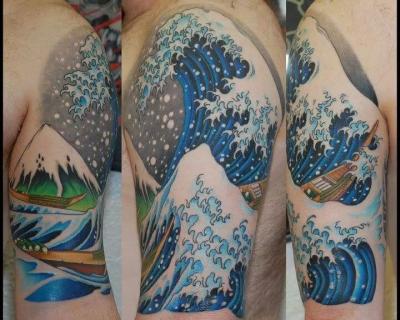 Many Japanese tattoos feature water. Specifically, waves are an element of Japanese tattoo art that are perhaps among the most recognizable (Think traditional Japanese artists, like Hokusai). The image of water in Japanese traditional tattoos is often combined with Koi, Dragons, or Oni. In addition to symbolizing strength and life, water tattoos convey the belief that life, like water, ebbs and flows. It is strong and swift when necessary, but can be gentle and calm as well.