The Swiss artist and designer of Ridley Scott’s Alien, H. R. Giger, has died aged 74, a spokesperson at Giger’s museum in Gruyere has confirmed.

He died in hospital on Monday after he fell down stairs at his Zurich home.

Born in 1940, Giger was best known for his ‘Xenomorph’ alien in Scott’s sci-fi horror masterpiece for which he won a visual effects Oscar in 1980.

He studied architecture and industrial design in Zurich and was known for creating strange dreamscapes. 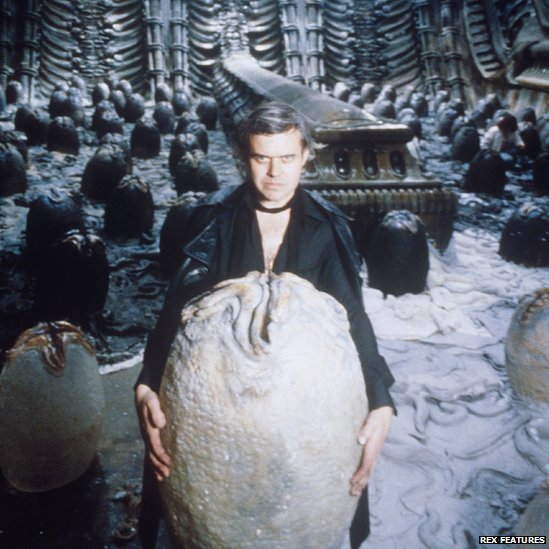 Giger on the set of Alien, his most well-known work

Meticulously detailed, Giger’s surrealist paintings were usually produced in large formats and then reworked with an airbrush and usually feature scenes of humans and machines fused together.

Giger described his style as “biomechanical”.

One of his pieces in particular – Necronom IV – inspired the alien killer in Sir Ridley’s hit film.

He also worked on Alien 3 (1992) and, more recently, appeared in a documentary about director Alejandro Jodorowsky’s unmade film of the book Dune.

Stewart Jamieson a friend and colleague of the artist said it was “natural that people will look at Alien as being his biggest impact because of its attention but his legacy is far more than that”.

“He was one of the primary surrealist artists of his generation,” he told the BBC. “He never considered himself a film designer, he was an artist and Alien was a different canvas for him to work on.”

British film director Edgar Wright tweeted: “RIP the great HR Giger. The Swiss surrealist who made night terrors into unforgettable art. We will miss you.” 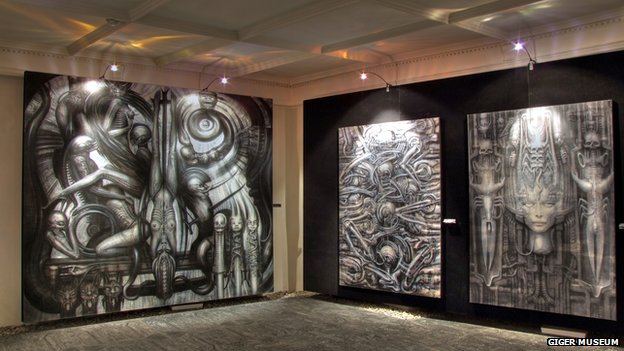 Giger’s museum is based in the historic, walled city of Gruyeres

Giger’s vision of a human skull inside a machine appeared on the cover of Emerson, Lake and Palmer’s 1973 album, Brain Salad Surgery.

A poster inserted into the album sleeve of The Dead Kennedys’ LP Frankenchrist attracted attention when it became the subject of a court case.

A complaint about the image of rows of genitalia on the poster resulted in the band’s vocalist Eric Reed Boucher, aka Jello Biafra, being tried for distributing harmful material to minors in 1986. The case was dismissed.

Despite the dark nature of Giger’s work, Mr Jamieson said: “The old adage that you can’t judge a book by his cover was appropriate with him. He was a very sweet man. The first time we met, I was amazed by how generous and shy he was.”

In 1998, Giger opened his own museum in Gruyeres, Switzerland, which alongside his own paintings and sculptures, displays works from his own art collection from the likes of Salvador Dali, Dada and Ernst Fuchs.

The museum is run by the artist’s wife, Carmen Maria Scheifele Giger.

Last year, he was inducted into the Science Fiction Hall of Fame in Seattle, along with fellow inductees, David Bowie and JRR Tolkien.

His work has also been exhibited around the world, including recent retrospectives in Hamburg, Germany, Moscow and Istanbul.